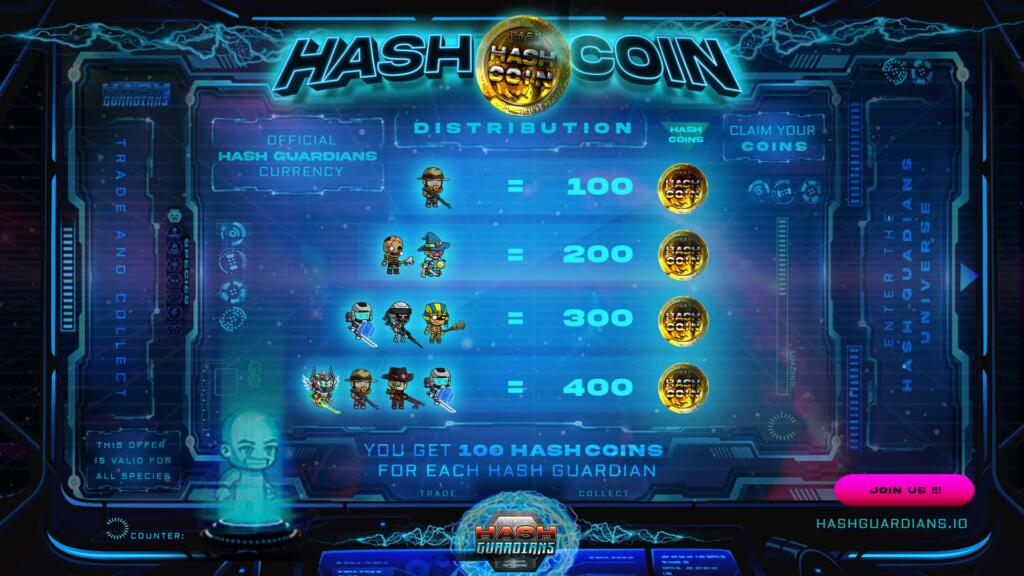 It’s time to dig back into the details and take a closer look at how HashCoins are being integrated into the HashGuardians Universe!

For a primer on HashCoins, their place in our game, and future utility, check out the original introduction to HashCoin article. It will bring you up to speed on HashCoins and their utility!

This article is Part 1 in a two-part series discussing the preliminary minting value of HashCoins, earning HashCoins through the HashGuardians Quest System, and a few thoughts on the future of HashCoins.

One of the main requests we have received recently in regards to HashCoins is for information regarding a tokenomic. As our HashCoins are currently an in-game only asset, they will not have a typical on-chain tokenomic that is applicable for tokens trading on a DEX. At this time, HashCoins will be given an infinite in-game supply, similar to other in-game currencies you might find in products from traditional studios like EA.

Due to the regulatory and legal requirements in Europe, it is not feasible for us to establish HashCoins directly as a DEX token at this time. We will address future ideas in Part 2, but rest assured, we have not stopped working towards this goal. We simply need to move forward with what is currently possible at the moment.

While there will be an infinite supply of in-game HashCoins, this does not mean that these coins have little or no value. The rate at which HashCoins are earned is controllable, and with your HashCoins, you will be able to buy various items. Many of these in-game items can be used to create on-chain NFTs, and we will also be offering large scale NFT drops allowing for the use of HashCoins as payment instead of Ada. In the next section, we will dig a bit deeper into this and a preliminary valuation for our upcoming Pre-Alpha HashBox mint.

Minting with HashCoins and Passive Rewards

As most of you know, ownership of a HashGuardian NFT does two things: primarily, it grants access to our HashGuardians play-to-earn game, and secondly, it gives the player the opportunity to claim 100 free HashCoins per month, per HashGuardian owned.

This passive HashCoin earning aspect of ownership is something that we are very excited about, but it’s also something that will take a bit of time to fully realize its full potential. Each year there is a maximum of 12 million HashCoins generated as passive rewards. We are still very early in our development and want to take a conservative approach in how we handle HashCoins. We would much rather leave ourselves room to expand than to overestimate something at this point, especially when HashCoins will be earned via in-game activity as well.

Our desire to reward our community through HashCoin rewards and free mints needs to be balanced with the reality that building a play-to-earn blockchain game requires a great deal of time and resources, especially at the start of the project. We are actively growing our team of developers, artists, and content creators, but we will remain dedicated to making sure our community and supporters are rewarded along the way as well. As a business, we seek to balance these two realities in order to create a lasting community with a sustainable business model.

After long discussions between our game development team, community management, and other advisors, we have settled upon the following valuation for use during our Pre-Alpha HashBox mint.

Using the original 44 ADA HG mint price, this works out to a 13.63% APR Passive Reward.

At this point, it is worth remembering a few things:

1) This value may change in the future as we evolve the relationship between ADA and HashCoins.

2) The underlying ADA to fiat value may change as well, which could increase the potential value of HashCoins significantly.

3) HashCoins can be used for minting, which also provides players a chance of obtaining rare HashGuardians NFTs.

4) HashCoins will be earned both passively and actively via in-game mechanics and quests.

5) HashCoin rewards are only part of our P2E economy, and do not include the value of the HashGuardians NFTs or other NFT items earned as in-game rewards or HashBox/loot drops.

Given the ratio for the Pre-Alpha Mint, the passive earning potential of owning HashGuardians is:

*These values are theoretical only, and do not correspond to an actual ADA return. The calculation is based upon the proposed HashCoin/ADA minting costs for the Pre-Alpha HashBox and potential future drops in the HashGuardians Ecosystem. The HashCoin is not a DEX token and should not be seen as such.

While this might not seem to be an overly large amount of ADA on a monthly basis (especially considering current ADA values), these are completely passive rewards for our community. Additional HashCoins will be earned in-game, and we need to consider that earning rate when balancing the HashCoin economy. We will touch more on that in a moment.

Our Pre-Alpha HashBoxes (and the unique NFT items within) will likely cost between 22 and 32 ADA each, depending on the ADA-fiat rate prior to launch. This would mean that minting a Pre-Alpha HashBox using HashCoins would require between 4,400 and 6,400 HashCoins. We know that a large number of our holders have not had the chance to earn this many HashCoins already. Rest assured, we value your support and have not forgotten about you!!

The final cost of minting for Pre-Alpha HashBoxes will be determined as we get closer to the minting date. In the future, HashBoxes will be available in a variety of rarities, and at variety of price points. We aim to ensure that everyone is able to purchase items using HashCoins, especially once in-game earning becomes possible.

Additional benefits of using the HashCoin Payment System while minting:

As HashCoins will be held by long term supporters and active in-game players, we want to build a few benefits directly into the HashCoin Payment System (HPS).

· A Pre-Sale Minting Window — No More FOMO!!
The HPS minting window will be opened 24hrs prior to public sales (the same as Silver Tickets).
HashCoin users will have early access to our future NFT drops!

· The Possibility of Special Discounts
Whenever possible, we will look to provide special discounts for HPS users during future NFT drops. This will directly reward our long-term supporters and active in-game players.

As always, we value community feedback on our plans and seek to create the optimum balance between development resources and community rewards. This is especially difficult in the early stages of a project, when there are no measurable revenue streams each month. As we mentioned previously, these details may change in the future, and we will do our best grow all parts of the HashGuardians Universe sustainably.

In Part 2 of this article, we will dive into our questing system and potential in-game earnings for active players!